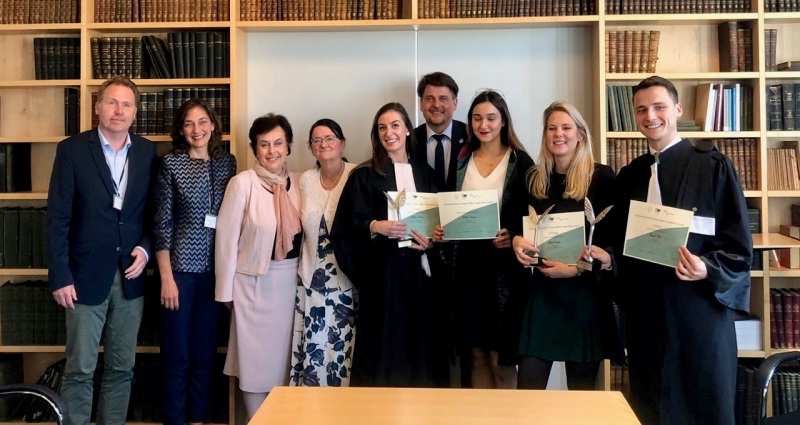 We had passion, we had logic, we had statute and precedent, and we had ancient history and philosophy from Greece and Rome. The Young Lawyers Human Rights Oratory Competition of the FBE demonstrated how strong the commitment of young Europeans is to human rights.

The competition was held in the Hans Litten House, the offices of the Rechtsanwaltkammer (RAK). Nezih Ulkekul of the RAK gave a warm and well received welcome, and thanks were given to the representatives of the RAK from the President of the Human Rights commission, Artur Wierzbicki.

The topic for the competition was “Freedom of Speech”. The 18 semi-finalists presented well prepared speeches which were varied in their approach to the legal argument as well in their oratory style. It was a hard task for the panel to choose four to be the finalists on Day Two. The topic for day two “The criminalisation of those who facilitate the travel of refugees is against human rights” was treated in debate style, with two for and two against. In each team one candidate presented and the second speaker rebutted. The candidates had only 2 hours to research and prepare their debate speeches. The judges put a question to all of them to test their spontaneous responses, and heard from the four candidates what each would do to draft legislation in respect of human trafficking.

Fatima Oraibi will attend the FBE Congress in Lisbon 24 -26 October to attend the Human Rights Commission and receive her prize and recognition from the General Assembly. She will receive a further Award from the Krakow Bar in April in memory of Mr MarianAnczyk, of the Krakow Bar and last President of the Grandes Barreaux d’ Europe, and co-founder with Mr Eugenio Guy Montalvo of the FBE, Mr Eugenio Guy, former Dean of the Barcelona Bar was the first President of the FBE in 1992.

The other semi-finalists were:

All participants were GREAT !
The FBE IIIrd Human Rights Oratory Competition for young lawyers and law students in 2020 is planned in Bilbao/Spain.

Previous Article: COLOMBIAN CARAVANA REPORT 2018
Next Article World NGO Day, Brussels, February 28, 2020 “From the Past to the Future: A Living Civic Space for a Living Democracy”