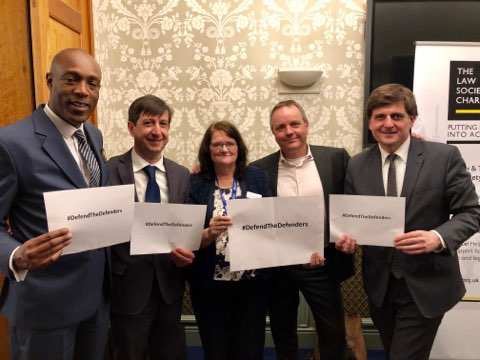 On March 25, 2019, a momentous event took place in the building of the Law Society in London. On this day, the Final Report of the Colombian Caravan 2018 mission was submitted.

This event has been honored by many personages. Our Federation (FBE) was represented by the President of the Federation Mr Michele Lucherini who gave a welcome speech.

The discussion panel about Colombian facts was led by the excellent Prof. Sara Chandler. The FBE Human Rights Commission was represented by its President Mr Artur Wierzbicki and its members Mr Donovan Lindsay and Mr Nardy Desloover.

The FBE participated in the 6th delegation of jurists to Colombia with members from Italy and the UK.

The Federation supports the peace process and recognises that this is a hugely important period when the peace process is threatened by those who do not respect the rule of law, nor the defence of human rights. After more than 50 years of conflict we welcomed the Peace Agreement and over the last two years the process that began to develop.

The FBE Human Rights Commission has a long term programme of support for human rights defenders who are at risk, and face daily threats, attacks and assassination.

The International Caravana travelled to Colombia in September 2018. 20 experts from six countries focused their visit on the impact that the peace process has had on the work of human rights lawyers and the dynamics of the conflict. The Caravana travelled to six regions, meeting with lawyers, judges, human rights defenders, victims, and state representatives, among others.

Delegates observed that violence against human rights defenders and social movements has escalated and that there has been a worrying paradigm shift in relation to the characteristics of threats and how threats are acted upon, and a proliferation and re-emergence of illegal armed groups.

Human rights lawyers in Colombia are at heightened risk because of their work seeking accountability and defending communities’ fundamental rights. Delegates heard reports of repeated aggressions against them: threats to their lives and their families; break-ins and thefts of sensitive information; disciplinary complaints filed to hinder lawyers’ work; and stigmatisation by public officials unduly linking lawyers to their clients or making accusations of their belonging to illegal armed groups.

Human rights defenders and lawyers also face obstacles when seeking timely and appropriate protection from the state. The state’s approach to protection tends to be reactive rather than preventive and lacks understanding of the context in which lawyers work and how to take specific circumstances of geography, culture, and gender into account when allocating protection measures.

It would be far removed from reality to conclude that Colombia is in a period of post-conflict, let alone at peace.

The International Caravana first travelled to Colombia on the invitation of Colombian human rights lawyers in 2008. Our sixth delegation heralded the Caravana’s tenth anniversary of international professional solidarity in defence of human rights, justice, and rule of law.

A steady constant these past ten years is that lawyers, human rights defenders, and social leaders continue to be threatened and killed for seeking justice and defending marginalised communities. Since the signing of the Peace Agreement in November 2016, hundreds of human rights defenders have been assassinated and the UN has called for decisive action to stem the tide of violence enveloping many regions.

Colombian’s official state Ombudsman has reported that a human rights defender is killed every three days. The country is highly polarised. In 2018, two years after the historic signing of the Peace Agreement between the state and the FARC, the Caravana joined a call for justice, truth, reconciliation and non-repetition. As the international community and colleagues in the legal profession around the world, we ask that the Peace Agreement be more than just paper and that it lead to transformation and transition for Colombia and security and peace for its lawyers, human rights defenders and citizens; a peace which all Colombians deserve.