Turkish cases before the ECtHR 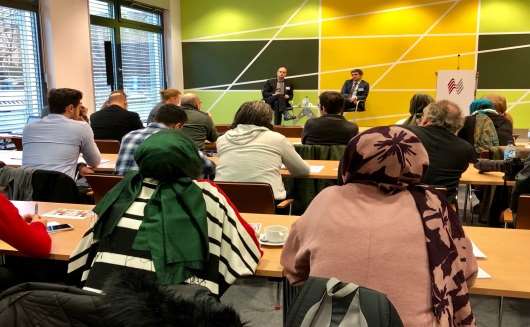 The Day of the Endangered Lawyer on January 24, 2019 is a day on which we call for the attention for lawyers all over the world who are facing harassment, threats, persecution or even torture and therefore the work of those Colleagues is made increasingly difficult.

We could help our Colleagues in Turkey that day by demonstrating our support in front of Turkish Embassies all over Europe as well as taking part in many panels/discussions. One of panel was organized by Amnesty International and DAV in Berlin/Germany in Berlin Bar on January 24, 2019 under the tittle :”Turkish cases before the ECtHR”.

We should realize that since the state of emergency in Turkey was declared in 2016, basing on public datas, 1,500 Turkish lawyers have been prosecuted and around 600 arrested. Around 3,000 judges and prosecutors are said to have lost their posts. In addition to journalists and opposition politicians, the lawyers are in the sights.

The panelist Mr Ümit Kılınç (human rights lawyer at the European Court of Human Rights (ECHR) in Strasbourg) said at the meeting that one could roughly make out three groups among the threatened lawyers. The danger attaches to the clients who are represented. Affected are clients from politically left circles (1), Kurdish clients (2) and followers of the Gülen movement (3).

He gave the lever for prosecution of lawyers in Turkey as Article 301 of the Criminal Code, which criminalizes the public downsizing of the Turkish nation, state or government, as well as

judicial bodies. He also stressed that there is little trust among the lawyers in Turkey in the justice system. The last hope is still the Turkish Constitutional Court, but also threatens to be ignored in important decisions by the courts of the courts simply (there was an open showdown in early 2018 because a criminal court had refused to release two journalists).

In his opinion as in many other, the ECtHR was a great hope for number of people, including lawyers in Turkey – but their confidence is dwindling. The ECtHR sees tens of thousands of cases coming from Turkey and has so far regularly rejected complaints, and instead referred the complainants to the exhaustion of national remedies.

Mr Stefan von Raumer explained he believes that the rigorous handling of the Court eligibility requirement has led to a permanent overburdening of the Human Rights Court since 2011. He also stressed that the ECtHR would only be prepared to break its stringent admissibility requirements if a complaint authority in a state exists only theoretically but not practically (for example, the ECtHR had accepted this for cases from Serbia, even though there was a complaint authority, but it did not apply to certain legal acts).

In the opinion of many, Turkey must restore the rule of law, release still-detained magistrates and journalists, and lawyers, restore the rights of teachers and magistrates ( judges and prosecutors) who have resigned from July 2016, restore freedom of press and information, end the state of emergency and fully implement the European Convention on Human Rights.