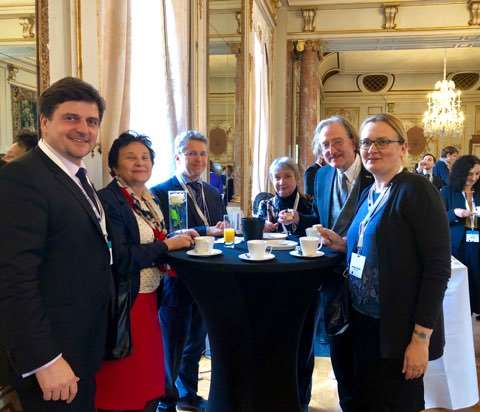 The theme of the 2018 colloquium was “Democracy in the EU”.
The Opening Speech at the Annual Colloquium on Fundamental Rights in Brussels/Belgium was done by Mr Frans Timmermans, First Vice-President of the European Commission.
In some words he presented the main subject as a fundamental right and the rule of law, one of three pillars which shall forever anchor the European Union. He wished the participants great discussions to highlight the role of political parties, civil society, organizations, platforms and other stakeholders in mobilizing citizens. I was one of them .

occasion of the seventieth anniversary of the Universal Declaration of Human Rights.

At the Colloquium as well as at the panels and parallel sessions we all worked together to identify avenues to foster free, open and healthy democratic participation in an era of growing low turnout in elections, populism, digitalisation and threats to civil society.

There were a variety of panels :

I do recommend to everyone if it would be possible to take part in the next 2019 Annual Colloquium on Fundamental Rights.